Here at Roedan we have had the oppertunatiy to work on a varied range of projects in many different engineering domains.  We have accomplised this due to our ability to adapt and use our flexable in-house developed processes to a range of situations. Case Studies for a selection of our projects can be seen below…

We were approached by a multinational industrial conglomerate to design and implement the architecture for a communications and power control subsystem.

The project is part of a major European consortium to provide Fast DC Chargers for research into Fast DC Charging and Smart Grid interaction.  For this project we:

The client required a platform that would allow MathWorks Simulink blocks to the executed and dynamically configured within a real time environment.

For this project we were tasked with designing a framework that would allow a system built from Simulink generated blocks to be described in an XML document and executed with stict real time constraints.

Designed using UML and using an Agile Methodology we implemented the framework in C++ and executing in Linux with the Xenomai real time framework.  The middleware allowed configuration of execution context parameters, handled the dynamic binding of execution blocks and provided support services such as a real time Database and real time IEC61850 9-2 sample values.

The middleware was designed to have a small footprint and provide strict real time performance. It has been used successfully in various production and simulation systems.

A project to implement an SMBus compatible smart battery.

We were asked by a leading supplier and manufacturer of smart batteries for Medical, Defense and Industrial applications to design and implement one of their batteries. After workshops were held with the company stakeholders we extracted the exact requirements for the device. The requirements were analysed and the battery firmware was designed in UML using Sparx Systems Enterprise Architect tool.  The firmware was then coded in C to the Misra standard for an MSP430 microcontroller target.

The firmware provides real time monitoring and control of a battery fuel gauge and it’s protection systems.  Low power operation was a major requirement for this project to ensure minimal impact on the battery to allow its primary function to be maintained.

Our client needed help in designing and implementing a unique modular smart battery system.  We were tasked with the design and implementation of their charging system that consisted of a distributed control and monitoring architecture.  The system communicates with a number of batteries over an SMBus connection and controls and monitors decimated charger silicon to ensure safe charging of the batteries.

We aided the client in gathering all system requirements and synthesised these into a valid system design in SysML.  Due to the distributed nature of the intended hardware, firmware was designed and written for multiple MSP430 based targets.

The client was developing a new node for their existing cash transfer system in response to a request from a major UK supermarket chain.  We were approached to develop the firmware for the new hardware platform that would integrate with their legacy communication system and other nodes in the system.

The new node has control of various motors and mechanical actuators under the command of a central controller.  The new device has some unique features not present in the clients existing system, it introduced a keypad and LCD screen for user interaction. Frequent demonstrations and interaction for the client was required to ensure that behaviour and the look and feel were consistent with the end customers requirements.

Project development started without the final hardware so to expedite the project we developed the system firmware on our own hardware platforms with the hardware layer abstracted until the clients hardware was available.  The final target hardware made use of an ARM7, LPC1798 processor with a Xilinx CPLD for routing of control signals.

The node integrated into their existing system using RS485 communications and due to the legacy controllers needed to meet strict timing constraints.  As part of the project we also enhanced other nodes within the system to add functionality and extra robustness to the communications.

Roedan created a digital dashboard to interact with a bespoke ECU for custom sports cars.  Making use of a high resolution touchscreen LCD display, we developed the communications layer and designed the graphical user interface to allow monitoring of the ECU and associated car parameters.  The GUI was designed using QT running on an ARM Cortex A8 Linux target. Special consideration was give to the environmental factors including ambient light conditions, reflections and water and dust ingress.

Roedan created a framework to monitor and supervise both Linux and xenomai processes in a heterogeneous real time system.
Rules were configured in XML and could be dynamically modified at runtime, the rules covered memory usage, CPU usage and Cycle time for the real time processes.
Processes could also be restarted depending upon exit codes.

Roedan were tasked with creating the software to make an underground utility detection device used in the construction industry.
The project also entailed Roedan helping the customer to capture and document the requirements into a structured and traceable format with the aim of having a set of atomic requirements that could be used to prove the system and met the final end users expectations.
The Requirements were captured in Enterprise Architect and an iterative process development process chosen.
In the first iteration we designed and made prototype hardware and software for the proof of concept, the graphical user interface was also prototyped to get the look and feel correct.
Different DSP devices were investigated and transflective LCD screens for outside operation, the processors used for the final project were a Texas Instruments C674x and ARM STM32F429.
The hardware platform also supported BLE, WiFi, GPS and the ability to sample and process real time RF signals from the companies unique and state of the art RF capture antenna and filtering systems.
Further iterations completed the full device functionality as well as communications to Android and iOS devices. 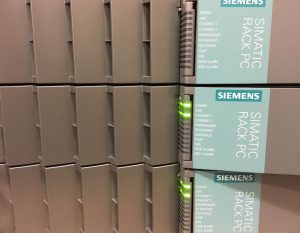 Using Siemens Industrial PCs (IPC647D) and their Soft PLC (S7-1500) and HMI (WinCC Advanced) software, Roedan were tasked with producing a system to support a unique fault location algorithm.
The system interacts with an IEC 68150 substation providing fault location results and receiving the status of the power system and power system measurements.